(This post is overdue because last week I managed to drop my fairly new MacBook computer and cracked the screen. Oops. An expensive mistake. So my computer spent the last week in the shop and I was unable to post blog posts until I got it back so I have a lot to put into one post.)

When I originally started Pat Speth's Arlington Square pattern for the Rainbow Scrap Challenge, I was thinking it might take me two years to finish. One year to finish the block corner pieces, and then the second year to finish assembling the blocks and making the border pieces.

Since I've finished the other two quilts and there are still a couple of weeks left before the end of the year, I decided to try to finish this one as well. That would leave me with only one project rolling over to next year.

I pulled out all the block pieces I made throughout the year and laid most of them out in the photo below. I made about 10 each month and I used whatever scraps I found, including uglies, but I only used white fabrics for the light portion. 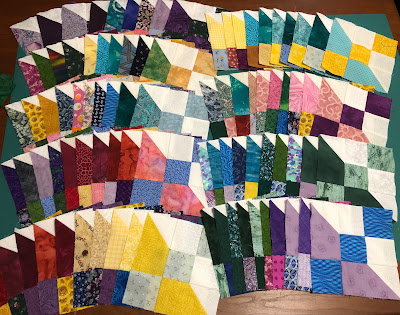 Since I made so many quilts with white scraps this year, I actually ran out of them. Towards the end, I had to start cutting strips off yardage so I figured I might as well cut out the fiddly border on my Cricut. It definitely saved fabric because if I had cut them out by hand, I would have cut 6.5" strips and then clipped off the corner. Instead, I was able to cut out the little white triangles for the pinwheels from that bit of fabric. 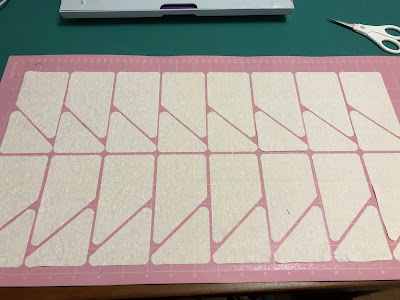 After digging around in my scrap boxes for colored waste triangles I found nearly all that I needed.

I've spent a few hours this past week assembling the blocks. I actually made 24 of them, but I have decided I really don't need another bed-size quilt. I already have too many. So, instead, I've decided to make two throw-sized quilts and gift them.  Here is the first batch of blocks assembled. 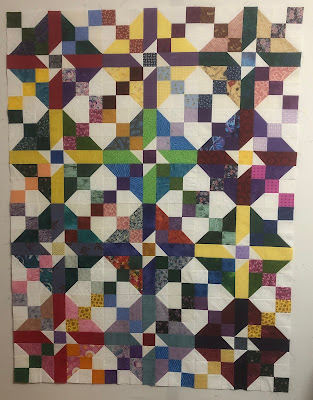 I haven't decided if I'm going to carry it on through the borders and then start the second, or build the second set of blocks and work on the borders for both at the same time.
Posted by Sharon Kwilter at 1:18 PM