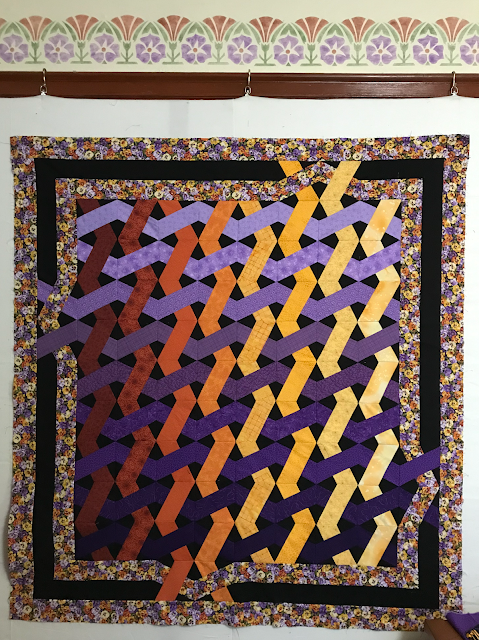 Once I got started, it really only took me a couple of days to piece this small lap quilt. The blocks themselves are fairly easy to piece. This flimsy also finishes up one of the projects on my WOOFA 2021 list, though it will take me a while to finish quilting it. I've ordered a Handiquilter long arm so it's just going to have to sit tight until I get it set up and get enough class time/practice that I feel confident enough to quilt it myself.

I originally saw this quilt pattern on one of the reddit quilting lists and I went looking for the rulers that folks use to cut this out, but they are designed to make 6" blocks. I decided I wanted my blocks to be smaller because I wanted to use more colors; my blocks are only 4". I had originally planned to cut it out by hand with templates, but once I got the Cricut Maker I figured this would be a perfect project to practice using the machine.

I was able to export the SVG file for block #2562 from BlockBase+ and make only minor adjustments in the Cricut Design Space. I'm quite sure it would have taken me more than a day cutting this out by hand, but instead, it only took a few hours with the Cricut.

The block itself, according to BlockBase+, is called Washington's Puzzle and was originally published by the Ladies Art Company in 1895. It was then published again in 1973 by Beth Gutcheon with the name Checkerboard Skew. It is a fun block so I would definitely like to try making this pattern again, maybe with a rainbow. This might be a fun project for next year's Rainbow Scrap Challenge.

I'm linking up with

Posted by Sharon Kwilter at 1:41 PM